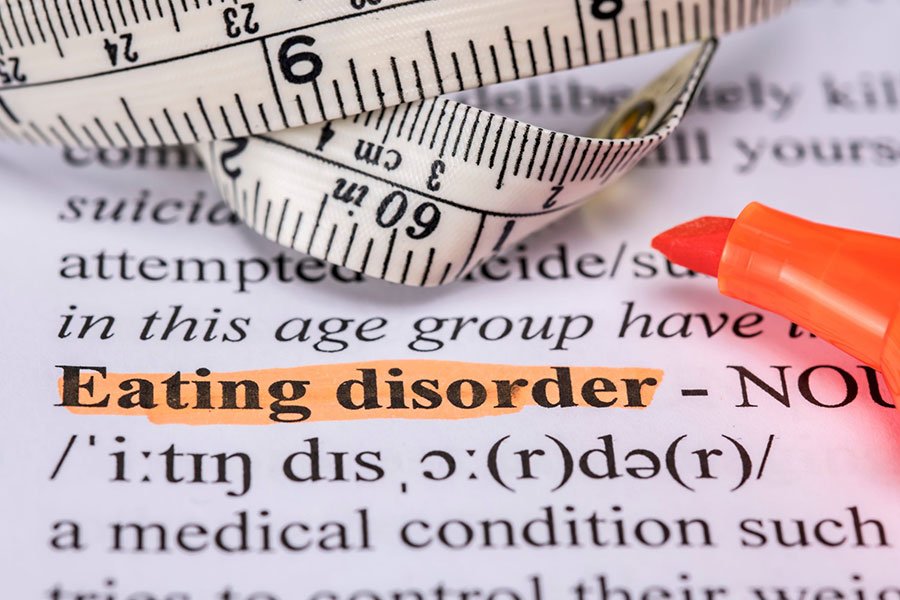 Anorexia nervosa is the most well-known eating disorder that typically develops in adolescence or young adulthood. Generally, those with anorexia view themselves as being overweight despite their true size. They restrict their calories, avoid eating certain foods and monitor their weight to the point of obsession. Many people with anorexia are preoccupied with thoughts about food and experience difficulty eating in public.
Often, those with anorexia compensate for food intake by way of various purging behaviors like vomiting, the use of diuretics, or excessive exercising. Over time, they experience the thinning of their bones, infertility, brittle hair and nails, and the growth of fine hair all over their bodies. In extreme cases, anorexia can cause heart or brain failure and death.
Typical symptoms of anorexia include:

Bulimia nervosa, like anorexia, developed in adolescence or early adulthood. Those with bulimia tend to experience moments of binging that continue until the person is painfully full. Once full, those with bulimia attempt to purge in order to compensate for consumed calories by way of forced vomiting, fasting, laxative and diuretic use, enemas, and excessive exercise.
Unsurprisingly, those with bulimia may appear to be a normal weight, yet they find themselves with a fear of gaining weight despite this. Their self-esteem is largely influenced by their body shape and size and they experience both recurrent episodes of binging and purging. Those with bulimia experience a host of other health concerns including:

Boddy dysmorphic disorder is often a symptom of many of the better-known eating disorders. It is categorized by an obsession with a perceived defect in one’s physical appearance or a concern with a slight blemish or quirk. Generally, those with body dysmorphia have unrealistic views of their body including their skin, hair, noses, eyes, teeth, chin, legs, lips, and height. Signs and symptoms of those with BDD include ritualistic behaviors like mirror checking, touching the area of insecurity, or covering the area of insecurity with clothing, makeup, and tattoos.
Typically, those with BDD desire constant reassurance from others, spend time consumed by thoughts or behaviors related to their “defects, and seek to correct their “defects” with frequent visits to the dermatologist or cosmetic surgeon. They may pick their skin, groom obsessively, or experience social anxiety.

Avoidant / restrictive food intake disorder was formerly known as a selective eating disorder and develops during infancy or early childhood. Often, those disorder persists into adulthood and is equally common in both men and women. Much like anorexia, those with ARFID restrict the food that they consume. However, they do not experience a preoccupation with weight gain. Rather, they are disturbed by the sensations of eating foods with certain tastes, smells, colors, textures, or temperatures.
Typically, those with ARFID do not eat enough calories or nutrients, which can lead to other severe health concerns. They may experience weight loss of poor development for their age and height due to their restrictive habits. Similarly, this lack of nutrients may mean they depend on supplements or tube feeding, and interfere directly with normal social functions like eating with others.

Pica is an eating disorder that is categorized by eating things that are not traditionally considered food. Those with pica often crave items like:

Pica can occur in adults, children, and adolescents, but is often seen in children, pregnant women, and those with disabilities. Those with pica have an increased risk of poisoning, gut injuries, and nutrient deficiencies depending on what they are ingesting.

Those who experience rumination disorder regurgitate food that has been previously chewed. Often it occurs voluntarily within thirty minutes of eating and develops during infancy, childhood, and adulthood. Typically, those with rumination disorder avoid eating in public and restrict the amount that they eat which causes them to lose weight or become severely underweight.